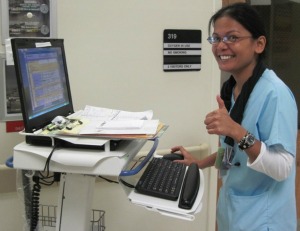 On May 1, 2010, HMC transitioned to an EMR system aimed at improving patient care and safety and the hospital’s financial performance. The EMR system, named HealthConnect, was developed by MEDITECH, to enable the hospital to connect electronically with internal and external physicians and other service providers to ensure the best possible care for hospital patients. The system also streamlines operational activities to improve efficiencies, which translates into better collections and more timely reimbursements from insurance and government providers.

HMC achieved a series of milestones to qualify for Federal stimulus funds offered through the American Recovery and Reinvestment Act (ARRA). To date, HMC has received over $1.5 million in ARRA funds for meeting Stage 2 Meaningful Use criteria. Hospitals that fail to implement an EMR risk reduced Medicare and Medicaid payments as well as government penalties for noncompliance. In April 2013, HMC was one of two hospitals in Hawaii to achieve Stage 6 of the HIMSS EMRAM. In November 2013, HMC implemented Access to integrate e-forms on demand with MEDITECH, allowing the hospital to go fully paperless in its medical charting, thus meeting the criteria for completing Stage 7.

As a whole, the East Hawaii Region of the Hawaii Health Systems Corporation has attained HIMSS Stage 6 and ARRA Meaningful Use Stage 1 designations, earning approximately $2.5 million for the entire Region for its achievements.

The hospital will be recognized at the 2014 Annual HIMSS Conference & Exhibition on February 24-26, 2014, in Orlando, Florida. Visit the HIMSS Analytics Web site for more information on the Stage 7 award.