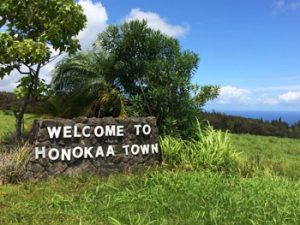 Honoka`a, nestled along the Hamakua Coast, was the classic plantation community in the early 20th century, but since the closing of The Big Island’s sugar industry, the district has had to diversify its economy. Presently, much of the district is still zoned for agriculture, Hamakua has seen rising prospects in other crops including pineapples, coffee, papaya, macadamia nuts, and tea.

Honokaa boasts a historic downtown district. In 1930, The Honoka`a People’s Theatre was built on Mamane Street by the Tanimoto family. Since 1993, the theater had hosted the Hamakua Music Festival every Fall. Ranching, along with nascent diversified agriculture, is the primary industry in Honoka`a and the Hamakua District. Honoka`a hosts a Saturday farmers’ market, held on Mamane Street and the Andrade Meat Market features locally raised and grass fed beef.